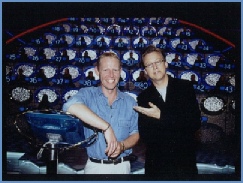 Watch the video before scrolling any further!!

Where, after several gruelling rounds of numerous, inane Trivia questions, I won a 3 week “Round the World Trip” for 2 people including £1000 spending money. (The first to win it!)

Just out of interest I also pressed the button to start the National Lottery draw for that night (Whilst also wishing luck to all those who worked at British Aerospace, Samlesbury). I won a tenner! Did you win anything that night?? Let me know if you did.